Lock It Up was started in 2001 as a part-time venture. The owner, Brian Kessler, was employed as a full-time firefighter in Lynchburg, VA. Working 24 hours on shift with 48 hours off in between shifts allowed him plenty of time to start the business and grow it slowly over the next two years. After six months in business, the company purchased it's first service van. 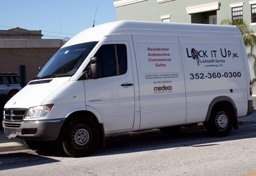 In 2003, Brian got married and they moved to his wife’s hometown of Leesburg and locksmithing became his full-time career. They lived in Leesburg until the end of 2015. They now reside in Lady Lake with their two boys.

Over the past 15 years Brian has spent many hours learning new facets of the trade and even achieving certification as a Certified Registered Locksmith through the Associated Locksmiths of America. He has been involved in the Central Florida Locksmith Association since 2006, served as its President in 2011 and 2012, and is currently the Treasurer.

Brian takes a lot of pride in his work and stands behind the quality and service he provides. When you call Lock It Up you can be sure that you will receive courteous treatment, high quality work, and a fair price.